The XML Summer School was quite the steamy experience this year. I’d ascribe it to global warming, except that last year’s final week in July was quite chilly. I believe it was at some point on the pub crawl when one of the locals in our delegation told me, in a moment of drunken honesty, that the same thing happens every year: The English forget it gets hot in summer and act all shocked when it happens. 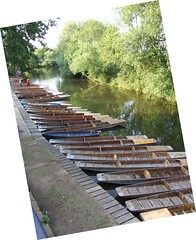 Bob DuCharme writes here about his School experience. His track looked really great — I wish it weren’t opposite mine. But I did have a great time hanging out with Bob, Priscilla Walmsley, Jeni Tennison, and everyone else in the off-hours. As Bob describes, we squeezed in a singing-and-playing session outside the college bar, where I tried out my new roll-up piano for the first time. All in all, the keyboard…doesn’t entirely suck. Marc Hadley managed to capture a picture of the scene, along with some stunning Oxfordscapes (he’s a real photographer, unlike me). 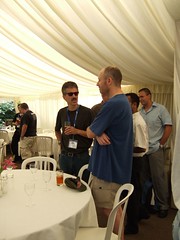 At the Trends and Transients session, we added something new: all the track chairs had a chance to opine (rant?) briefly. Peter Flynn and Sean McGrath went back and forth on microformats; there was a great moment when Sean insisted, almost tenderly, that “Microformats are beautiful.” Peter shot back some advice on avoiding Tag Abuse, and advocated joining his SDATA club.

I got cute with the concept and spent my five minutes on Tr*: two Tropes, three Trends, two Transients, and a Transparent for the web services area. I think it was when I mentioned “architectures” as a Trope that Paul Downey (who took some wonderful photos himself) commented (slightly paraphrased), “Protocols are really difficult to write. Look at TCP/IP! Giving people ways to create new protocols is like giving children machine guns.” You go, Paul! If by architectures we mean the building of frameworks wherein people constantly have to invent new protocols to use them, I worry for the security of systems based on them.

The Transparent I mentioned was “policy”. Technology is rarely more than 30% of a solution, with governance, policy, legal, and other messy human issues making up the rest, and yet many of us rush to work on the technology because it’s cool and it’s tractable. I’ve seen this done recently by people who really should know better. 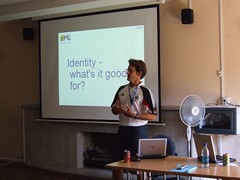 I’m insanely biased, of course, but I thought my track rocked. I hope my illustrious speakers don’t take this the wrong way, but I thought we achieved many moments of actual edutainment. A few highlights: 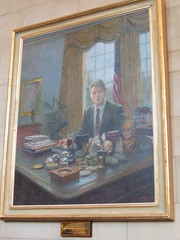 Finally, here’s a portrait of Bill Clinton that hangs in the Rhodes House, taken at one of the evening events. If you want to get a closer look at Bill Clinton and what are apparently his favorite objects, go ahead, click…you know you want to.