I’m wondering if this was more fun in the doing than in the watching, but hey, you be the judge — Conor has posted a (subtitled!) YouTube video of our performance! Thanks a million to Conor for doing this. By the way, Peter Tapling of Authentify, one of my co-perpetrators on this, sent me a note suggesting that the title of the song should be Bohemian Rhaps-ID. Most excellent.

So now, a little more of the backstory. When Kaliya asked me to help with the un-talent show, I asked some friends ahead of time what I could do to encourage participation. I knew there would be a karaoke setup there, though we didn’t want to have to pull that out of the bag first thing, to give people a chance to perform with a guitar or whatever. My sister-in-law does some DJing, and she’s the one who suggested the idea of writing parody lyrics (thanks, Leah!).

I had absolutely no time to think about doing this until I got through my SAML/Liberty Alliance/federation presentation on Monday, and found myself tossing around ideas with my dinner companions, whose names you can see listed as coauthors, on Monday night. It’s all Laurie Rae’s fault, really — she was like a dog with a bone. Being totally honest here, I was like that with getting the lyrics done, but she actually promoted it and got our “choir” lined up.

She suggested doing something with Summer Lovin’, and then a Talkin’ ‘Bout My Federation parody (which has possibilities — maybe at the next IIW? who’s in?). Once we thought of BoRap, I pulled up the original lyrics on my Treo and we worked from there. Peter Tapling was astonished, nay, actually somewhat disturbed that we saw it through — and he brought over someone after the performance who insisted we couldn’t possibly have written it the previous night.

Luckily, this wasn’t the only performance at the un-talent show! John Kemp and Pat Patterson performed Whole Lotta Love, I did a Hotel California duet with Kelly Mackin from CA and an I Got You Babe duet with Laurie, and Nick from Silent Rhino (I hope I got that right!) recited I Am the Clorox and I Speak for the Me’s, which was awe-inspiring.

I’ll update this post sometime today with a link to my photos from the event. You won’t want to miss ’em, especially the Whole Lotta Love ones…

UPDATE: No, not about the photos yet, but about the gong. I’m not sure exactly what possessed JeffH to bring it with him, but he’s local and he’s a drummer, so QED, I guess! Kaliya used it throughout the IIW event to signal session transitions and such. Just imagine how wide my eyes got when we worked through the whole set of lyrics and I realized…what comes at the end.

UPDATE 2: Okay, photos are up! Here’s a teaser. 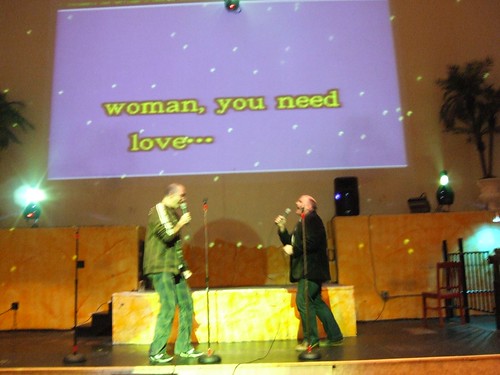